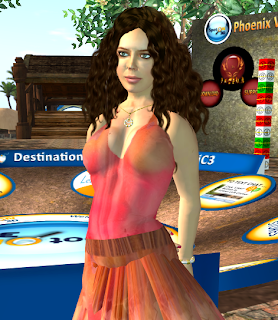 Hey everyone, please join me in welcoming Ricki Riggles to the SpotON3D family!

Ricki still considers herself a newbie to this world, but not to online worlds in general. She was introduced to Second Life in May 2007, when an old friend from the heyday of IRC (Internet Relay Chat) brought her in world to meet someone she referred to as 'her Swede'. Well, the Swede has left Second Life, but Ricki continued to hang around. At first, she looked upon this new online world as nothing more than a particularly fancy chat room... but she was quickly disabused of that notion. Ricki discovered that she could walk.. run.. and FLY! Everything that she saw amazed her... and she quickly became hooked! As soon as her avatar was old enough to add funds, she paid an absolutely ridiculous amount of money for a 512 plot on an island estate and began to make herself a home.

Ricki never considered herself a creative person, so she spent the next four years or so just SHOPPING. She couldn't imagine ever being able to make anything nearly as nice as what she saw, so she never even tried. She has been a lily of the field.. no work and all play!

Ricki enjoys dancing, particularly couples dances, and is a total animation freak. If it makes your avatar move, she has to have it! One of Ricki’s hobbies has been making over “n00bs”... beautifying the world one avatar at a time. “I took a break from that when I realized I was leaving a string of - if not clones, then at least brothers - in my wake. Please forgive me in advance if I try to 'fix' your avatar.. it's a hard habit to break!”

After a while, Ricki found that her early sense of wonder with Second Life had turned to weariness and dissatisfaction, and she was getting extremely critical of everything. Eventually, she felt that it was time to take a breather from Second Life, and so she backed away from it for a while. She visited IMVU briefly, but didn't enjoy it. Besides having what she describes as rather “freaky” looking avatars, not being able to walk annoyed her a lot.

One night, she decided that it was time to check back in, so she stopped in at Frank’s Elite Jazz Club, where she met Point Adamski. As it turned out, this was truly a chance meeting. Ricki had been involved with Gor in Second Life in many different roles, serving as House Physician in a great slave House and as Chief Physician of a small city...but she did not realize at the time that Point was a chief figure in the Gor community. They had quite an interesting chat, including discussing what she would do if she were in charge of Gor. She laughed at the idea, until she realized.. he really MEANT it... he WAS in charge of Gor, here in SpotON3D! Of course, she HAD to come and look.

When Ricki came to SpotON3D, what she found reminded her of the early days in SL (with a few exceptions... “my shoes and hair never attached to my butt on TP!”) Ricki feels that SpotON3D is in many ways a frontier, and she really likes that aspect of it. Granted, there isn't as much 'stuff' here yet, so she has actually started learning how to make (or at least to modify) her own things. She has gained a whole new appreciation for content creators, and wants to thank all of those who have so generously shared their work here.

What she plans to do here in SpotON3D is still a bit up in the air. She treated herself to a sim for Christmas, and is enjoying being able to play with the terrain and textures like she never could in Second Life. She says that the fun has come back into virtual reality for her. She would like to learn more here than she did in SL, and help to make this third life a good one.

Ricki is still in Second Life, usually under the same name. She doubts that she will ever completely leave...she has too much good no-transfer stuff there that she doesn’t want to abandon! In real life, Ricki is retired and lives in a suburb of Vancouver, BC. She loves to chat, so if you see her online, don’t hesitate to send her an IM :)
Posted by Greg (Fran) at 3:07 PM