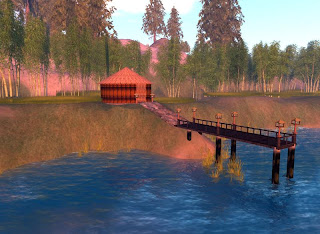 Please give a warm welcome to one of our new residents, Ashota Alchemi... someone who definitely was born to roleplay!

As someone who is NOT accustomed to the protocols of roleplaying, I have to admit that I was a little taken aback when I first met Ashota earlier this month. When I greeted him, his first response to me was:

Ashota Alchemi grins and nods.. "Hi yourself.. Hows it going? Busy, with the new year?"

The rest of the conversation that day continued in pretty much the same way. He was very friendly and cordial, but insisted on speaking to me in the third person, as if he were narrating a story... and throwing in cues about things such as laughing and nodding his head.

Before I could entertain thoughts of slowly backing away and calling in the men in the white coats, our own Varda Silver (an avid roleplayer herself) assured me that this was quite typical for those who are immersed in the roleplay experience, and thus it becomes a natural part of their speech. I guess that I really should get out more. At any rate, I have found that Ashota is one of the nicest people you would ever want to meet.

Ashota tells me that he has been playing a furry for many years now. His first experience was in FurryMuck, a text-based freeform online roleplaying world that came about when the world of furries was just getting started. It allowed him to grow and to develop his characters over time. Ashota is still a member of FurryMuck and has been in other online worlds, including City of Heroes. He has been involved in the furry community since about 1987, going to conventions, doing roleplaying games, and collecting art.

Ashota joined Second Life in 2005, where he currently rents a section of an Asian-themed sim run by Ukro Ashdene, another of our new residents. Ashota takes part in a regular roleplaying game on the weekends, and runs a Friday night D&D game. He says that he suffers from what he calls "Alt-aholism", playing wildly different characters and creating new ones for the fun of it. In spite of this, the character that he generally goes by is Boojum the brown bunny, and he runs a forum that hosts online play-by-post roleplaying games at http://www.boojumbunny.com.

On SpotON3D, Ashota wants to create a sim where furries can come and play, relax, and feel welcome. He also wants to help build up the Asian-themed universe that Ukro Ashdene is currently recreating on his own sim here in SpotON3D. One of Ashota’s sims will be a wilderness land of mist and shadows where the Yokai rule, and it is located right next to Ukyo's sim. The two of them plan to work together on setting up cross-sim events and fun.

Most of Ashota’s regions will become a part of the adult community, due to the fact that he does not wish to have his land encumbered by the restrictions that are imposed on our public Web Worlds. The adult community is run by Point Adamski of Homestone3D, and has its own pricing structure and signup procedures. But in spite of this, Ashota is also a member of SpotON3D and is considered as much a part of our community as anyone else.

Among his other interests, Ashota enjoys creating 3D art and animations using Poser Pro, Vue, and Carrara. 3D art is his second big love after roleplaying, which he got started in by creating pictures of his characters. He also does nature photography, combined with hiking when he can manage it. He enjoys cooking and trying to smoke meat at least once a month... although lately, he says that he’s been working more on side dishes and desserts.

Please join me in welcoming Ashota Alchemi to the SpotON3D/WorldWorks family!
Posted by Greg (Fran) at 11:48 AM