Get going folks and outfit your avies on the SpotON3D grid, because tonight is a first in the Metaverse. Live ... Onstage .. Back2Back ... 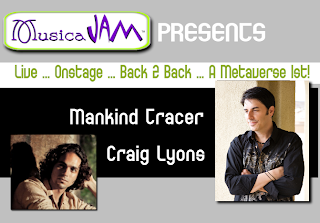 If you've ever heard either of them perform you KNOW they rock our worlds like no one else. And now .. together for the first time, they'll play to you in the hottest new grid out there, SpotON3D at the premiere of MusicaJam.com performances. Be there or be ... well .. CUBED! :P

Mankind Tracer has been labeled Second Life's Premiere Rock Performer for good reason. For over 4 years, this live performing artist has released three CD's, has won every prestigious Second Life Award and has attained well deserved fame and popularity like no other. He performs his amazing original music as well as a host of covers from the 60's through the present, offering an unprecedented level of audience interaction by way of audience requests he takes through IM's during his standing room only events. Don't miss Seth Regan as he performs as Mankind Tracer in the first ever Official Live Music Event in SpotON3D!

With three self-recorded solo albums released during a period of artistic solitude on the shores of Lake Erie, Craig Lyons has exploded into LA's music scene with the release of his latest release, 'On Reflection'.

A quiet small-town guy bringing heart back to a cynical music landscape, Craig brings intimate acoustic sublimity to his live electric rock show. His band performs regularly at LA's most distinguished venues including The Viper Room, Key Club, and the House of Blues.