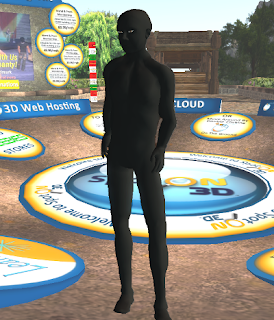 "I've Got an Animation For That..."
This has been the battlecry of Michael Somerset, who has been the in-house animator for SpotON3D for many months now. With 4000+ original animations at his disposal, and the ability to create new ones on demand, he certainly has no problem backing up that statement.

Based on how we see him in world much of the time, one might think that Michael is some superhero (or possibly villain?) lurking about the metaverse. But there is a good reason for his all-black appearance: it gives his avatar what is referred to as a low "avatar rendering cost," or ARC, which helps to make sure that there is nothing on him that will cause lag while he is testing out animations.

Before venturing into online worlds, Michael was a bench carpenter for a large yacht company, building furniture for use inside the yachts. He started his online journey after an accident at work left him partially disabled. He was introduced to Second Life by Linda Kellie, a childhood friend who has worked in online worlds and has recently open sourced much of her own work. While Michael was going through physical therapy and was unable to work, Linda asked him if he would like to try building furniture in Second Life. Since he had time on his hands, and was not used to sitting around, he decided to give it a shot. He picked up on it quickly, and it wasn't long before he realized he would need animations for the furniture. But when he discovered how expensive it would be to purchase a number of good animations, he convinced Linda to show him how to make his own. Within three months, they opened an animations store together known as "Lotsa Balls". It wasn't too long before he was doing well enough to strike out on his own, and that is when he opened his "Ball Mart" animations store.

Michael learned about SpotON3D from another grid owner, who had been complaining that COO Tessa Harrington was "plugging SpotON3D in Second Life." (I suppose this goes to show that any publicity is good publicity!) Michael has since moved his Ball Mart store to SpotON3D, and now serves as our full-time in-house animator. He has been creating many exciting items for us, including snowboards, skis and ice skates for our upcoming SnowyBrook Winter Resort community.

Since coming to SpotON3D, Michael has worked with the staff to learn more about how scripts can be effectively used with animations. This led to him creating something that he calls "Digi-Food." Unlike other food items available in Web Worlds, Digi-Food disappears bit by bit as you eat it. By combining talents in animation, scripting, and sculpts, as well as texturing, he will have new products out very soon. Items nearly finished include a watermelon eating contest, steak dinner, pancake breakfast, apple, Popsicle and many other foods and meals.

In real life, Michael Somerset is Michael Sietz, 50 years old and living on the Oregon Coast. He is a United States Navy veteran of five years, with two kids: a son in college, and a daughter soon to be in college. Although it is never required, Michael likes the fact that many of those within SpotON3D are willing to disclose at least some of their real life information, as it denotes accountability and honesty.

When asked what he would like to accomplish here in SpotON3D, Michael says, "I'm really excited about this Web World and the direction that it's going. If I had my wish, what assistance I can offer would drive SpotON3D to a much better known grid than any previous." We're very fortunate to have Michael here with us, and we very much appreciate the contribution that he makes.
------------------------------

Also check out our SO3D Like Bytes page on Facebook, at http://www.facebook.com/TessasLIKEBytes
Posted by Greg (Fran) at 6:59 PM