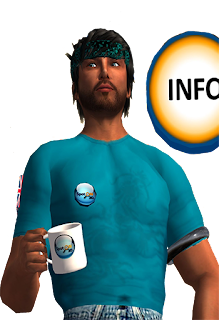 Someone With a Flair for the Dramatic...

So, what exactly is "drama"? Based on one of its more recent meanings--situations packed with explosive conflicts and negative emotions--it's probably something best to stay away from. On the other hand, the word also has a very GOOD connotation. People might be standing around our welcome area, mesmerized as they listen to someone read Shakespeare or Edgar Allen Poe with feeling...or they may experience "drama" along with a healthy dose of comedy, such as when watching an original play performed in a jungle setting by a troup of actors not afraid to make fools of themselves. Such is the drama brought to us by our own Ixmal Supermarine.

Ixmal calls England his home, has a background in law and has been working as a Human Resources professional. He stopped working full time in order to raise his children, who are now 22 and 19. He now describes himself as a self-employed, stay-at-home dad and homemaker with a very patient and understanding wife, who manages to find time to have fun.

Ixmal is something of a veteran to digital worlds. He has visited such places as Blue Mars, Inworldz, New World, IMVU and Videoranch, to name a few. But prior to SpotON3D he has spent most of his online time in Second Life, and it was there that he re-discovered his love of acting. He has worked with the now-inactive Metaverse Shakespeare Company and with the Rockcliffe Theatre Group, among others. He has also done directing and writing, as well as live poetry and story readings. Most of his work has been in voice, but he's done some text-based role play as well. According to him it is all for fun, but he always does his best to conduct himself in a professional manner.

Ixmal says that he has become disillusioned by the griefing and trolling that he sees going on in Second Life, and by the fact that it is allowed to continue unchecked. He also does not personally believe that it is good for adults to play the roles of children, or for children to to be allowed on the grid pretending to be adults. For these reasons and more, he feels that SpotON3D has the potential to be a much more viable alternative. When asked why he came here, he says that "I was impressed by (Tessa Harrington's) vision, her values and her hands-on approach and wanted to be part of the project straight away." 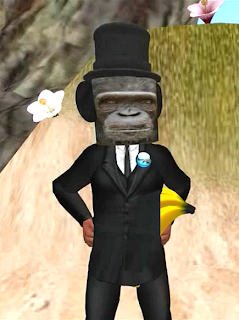 Ixmal loves putting together live theater shows, and everything that comes with it...the planning, rehearsing, performing, and in general being part of the team. He recently produced, directed and starred in an original play called Avatarzan, a splendid spoof on the Tarzan story. He enjoys meeting people of other nationalities, cultures and world views, and in his position as a "hub hugger" he is always willing to answer questions and be helpful in general. But beyond that, he does what he can to make sure that people are having fun and are happy. He constantly shares spontaneous jokes and general silliness of all kinds, which I find to be welcome and refreshing.

Ixmal's hobbies include history, cooking, beekeeping, sailing and art galleries. As for what he wants to do in SpotON3D, he would like to continue producing plays (both comedic and serious), tell stories, help with training materials, and do what he can to make others happy. But he also says he would like to do such things as "watch glittering C-beams on the shoulder of Orion, seal my space armour with a raffish grin, and save Humanity." Hmm... well, that's Ixmal for you. We love ya my friend, and so glad to have you around.

Also check out our SO3D Like Bytes page on Facebook, at http://www.facebook.com/TessasLIKEBytes
Posted by Greg (Fran) at 4:27 PM