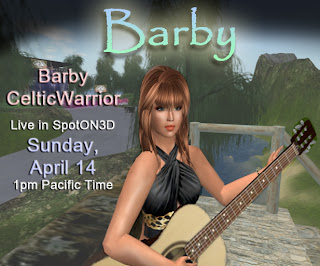 CLICK OUR 3DWEB Widget to Beam in Effortlessly to Barby's concert:
Get your AVI outfitted for FREE at the Linda Kellie Freebie Mall!
http://3Durl.com/map/spoton3d/Freebie%20Mall/125/99/23

Facebook Fan? Use our FB Widget here and never leave your friends & family on FB. :) https://apps.facebook.com/webworlds/


A Great Performer with an Amazing Background
Barby is a seasoned performer who has been pleasing audiences for three years in Second Life as CelticMaidenWarrior Lancaster, and now brings her awesome talent to SpotON3D! She plays all your old favorites from America, Eagles, Carole King, Carly Simon, Van Morrison....etc, etc. She knows 2001 tunes, and if she can't do the song you request, she is sure to be able to substitute one you won't be disappointed in. She even learns songs that her fans have requested she learn.

Celtic taught herself to play the guitar in 1971 when she was 13 years old. Her first performance was at an 8th grade talent contest, for which she sang Kris Kristofferson’s “Me and Bobby McGee”. She spent her teen years in the middle of her bed with her John Denver song books. When she left home to join the Air Force, she married and quickly started a family which left little time for guitar playing. During the mid 1980’s she found comfort in performing worship music for her mission church in Okinawa, Japan, as well as singing in a contemporary Christian band which toured around the island. She performed in the USOs for American Military servicemen and their families. Celtic has also broadcast live on Japanese radio from the Okinawa Zoo, and Botanical Gardens. She traveled to the Philippines and performed for 5000 people in a dilapidated athletic auditorium, and traveled around the barrios sharing music with the local people. Now Celtic is playing everything from folk to classic rock and easy listening, and rounds it off with traditional Celtic ballads (which she does acapella).
Posted by Greg (Fran) at 10:36 AM