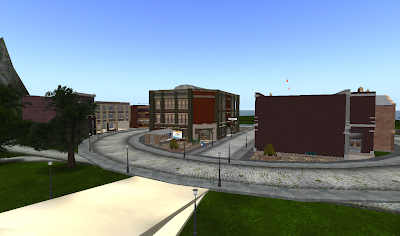 Biz Grid Viewed from the Elevated Walkway
As the newly embedded reporter on the SpotON3D grid, I thought it time to do some exploration of the environment. After logon, I took a stroll out of the landing area and into the Biz Grid on Zeta, a SIM adjacent to the landing area on ETA. I'd been through the district one time previously, shortly after the grid had opened when Tessa had graciously invited me in for a tour. Several months had passed since that first visit, but my initial impression of the build still held as I camera scanned the area when it came into view. It reminded me then and now of a suburban mixed use office park with a series of low rise office buildings arrayed around a circular road, all of which are immediately viewable as one crosses the elevated path into the SIM. Within the circle are more buildings all of which house demonstrations of the various décor available within the SpotON3D "Virtual office" offering. The layout within the circular area suggests a more urban feel but still housed within the confines of an office park . On my entry into the SIM, a web page loads automatically which provides SIM information to the visitor . I read the following information on the page:

"BizGrid is a region with a real world business focus. Here we offer work spaces for companies on the leading edge of telecommuting, as well as for small stand alone businesses who wish to have an office presence within the 3D web. Currently in development are a set of tools including our new Overature Presentation System."

I closed the web page and continued with the camera scan before I finished the walk down to the end of the raised walkway. I found the symmetry of the layout pleasing. Directly in front are the building demo's all within the circular area and I debate on which direction to go. After tossing a virtual coin and losing the call, I turn left and follow the cobblestone textured road. The buildings on the outer side of the circle are unoccupied at this time and with the security feature enabled, inaccessible. A click to edit on one shows me that they were created by Felonious Nitely, whose profile text tells me that he has been, "here since the first test boot...and got the nervous twitch to prove it". Mr. Nitely is also a builder and resident of Second Life. Having traversed half around now, I find my virtual self standing near an open air seating area. It looks very much like an outdoor café, but with no espresso in my inventory to enjoy I decide to press on.


On my left is a bridge which leads across a canal and into the next SIM which is called Epsilon, also a business themed SIM. I momentarily think of crossing the bridge, but decide to save exploration of it for another date and time. On the cobblestone road once again, I walk past several more buildings, all unoccupied and inaccessible. With the arrival back at the start point, I find a park bench, point, click and sit where I jot down a few notes about my visit.


I've not been a big fan of suburban office parks, having worked in several during my career. I am however favorably impressed with the architectural diversity I've seen represented in this build. While the overall look and feel presents an office park, the one key difference between this and a real life counterpart is in that diversity of structure. One could of course criticize the build as being to "real life" like in its layout and use of textures. Any one who has traveled extensively within second life could point to examples of where imagination prevailed and idealistic views of the workplace were created. However, this build is pleasant to view, easy to navigate and has a comfortable "I've been here before" feel. As the architectural dictum of "form follows function", suggests, the BizGrid was built for business and I think it succeeds well in that aspect.
Posted by Unknown at 1:00 PM